Mt Eliza Volunteer Bush Fire Brigade was formed on Wednesday 16th December 1936 as a result of a public meeting held in the old Mt Eliza Public Hall. It was decided in the meeting to register the Brigade with the Bush Fire Brigades Association.

The meeting was the outcome of a campaign in which practically the entire community was involved in.

The brigade was founded by:

In 1946 the station was built on the corner of Mt Eliza Way and Boundary Road (Canadian Bay Road), now the Safeway Carpark. Unfortunately, the fire station was destroyed by fire in 1971 and was temporarily stationed in a disused Mobil service station, now known as the Mt Eliza Telstra Exchange.

In 1974, the Fire Brigade was relocated to the present site at 103 Canadian Bay Road Mt Eliza and opened in December 1974 by Chief Secretary Ray Meagher with Chairman of the CFA Dick Eason, Chief Officer Arthur Pitfield and members of neighbouring brigades.

The first call that the Mt Eliza Volunteer Bush Fire Brigade attended was on Sunday 11th January 1937 when several acres of scrub was burnt along the banks of the Kackeraboite Creek. 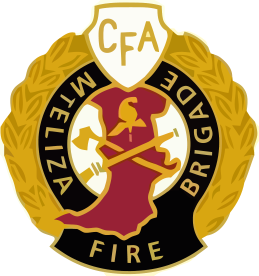 The colours were designed on a red, black, and white theme. The colours of three football teams followed by the competition committee members: