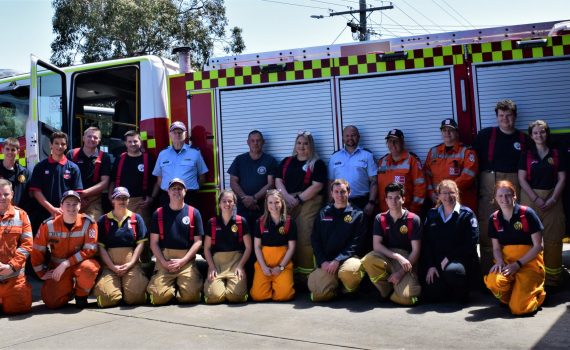 It has been a busy year at Mount Eliza Fire Brigade. In 2018 we responded to over 277 fires and incidents. We’ve put together a list of the biggest events, incidents and fires for the year.

Members from Mt Eliza along with Mt Eliza Tanker have been responded as part of strike team 0802 to assist at a fire at Darnum in West Gippsland.

At 3.51am this morning Mt Eliza Tanker was activated as part of strike team 0802 to assist with the fires in South West Victoria. Currently the crew is in Campertown assisting with a fire around Lake Gnotuk, video attached was taken by a local resident at around midnight.REMINDER TODAY Sunday 18th of March is a Total Fire Ban for the South West and Central Fire Districts (This includes the Mornington Peninsula) also a severe weather warning in place for DAMAGING WINDS for most of southern half of Victoria.

We're here at the My Mount Eliza Run+Fun Festival. Come say Hi, meet our volunteers and see our fire truck!

We're at the corner of Fletcher Road and Nepean Highway in Frankston collecting donations and raising money for Mt Eliza Fire Brigade. Come drive past if you wish to donate.

22nd April  – Attended Bark in the Park at Mount Eliza

We're here at Bark in the Park Mt Eliza. If you are at the event, come and chat to us about fire safety, or ask us any fire related questions you may have. We are located at the entry near the Scout Hall.

Attended the Camp Challenge Junior Camp at Camp Manyung where the kids had a fantastic time with the fire trucks.

4th July – House Fire with reports of a 12 year old trapped inside her burning home with her grandmother missing.

12th July – Reports of gun shots, which were later established to be illegal fireworks

It's a sunny weekend, so come head down to Bunnings Mornington and pick up some supplies for your home, a snag and have a look at our fire truck. The kids (and adults) are enjoying jumping in the truck!

It's the old saying that firefighters get cats out of trees. Well today that was exactly the case when this little pussy…

1st day of summer, what we can expect this coming fire season.On early Saturday evening on the 1st of December. Mt…

It's an eventful weekend with our annual Christmas Present Drop and Christmas Tree sales.You may see Santa driving…

we would like to wish everyone a safe Christmas and a very Happy New Year.